It takes two minutes to return a smile, a lifetime to grieve a loved one, and thirty seconds for panic to set in when your child’s missing. People can vanish without a trace, be lost and never found, die of sudden or natural causes and we’re left to wonder about time. The time we could’ve spent sharing our love and appreciation with that person, a better use of the time spent with them not knowing it would be the last time we would see them.

It’s happened a lot in my life-loss and the grief’s felt like a never ending cycle of turmoil and pain. Ever circulating and appearing in my life for a personal loss of life or one shared with a friend. Time where you wish you hadn’t said words in anger, fear or mistrust. When you could see past your very human ego to forgive instead of forming the words of negativity and pain. Forgiveness really is an art form, to move past the pain inflicted on your psyche and spirit. To turn the other cheek and give kindness when in your heart you know it’s the right thing to do. Forgiveness solves many problems but what happens to the person who releases the one who caused the indiscretion in the first place?

Do they simply forgive and forget words that sliced through their heart like a serrated knife? Do they move on and feel their spirit lighter with an air of peace? Does the simple act of saying “I forgive you” imply that they understand why the hurt was inflicted upon them? Here lies in the struggle, I personally find it difficult to forgive. I was raised with an armour of stubbornness and tenacity that’s made it difficult to make that choice to forgive. I feel weak and vulnerable, to relent to pain caused to me. I’m human yet moving past the pain to divinity is better for my soul.

I recently had an argument with my son and in his preadolescent mindset he chose to walk away then help resolve it. We were in a city we had never been to before and on our way back to the hotel we were staying at. He thought his Dad and I were being unfair so he stomped away. I had no idea where he was going or if he knew how to find his way back to our hotel. It was a dark yet a well lit parking lot but to see him run away like that was heartbreaking. I was feeling more scared then angry as I ran after him and he disappeared!

My family and I entered the hotel and I couldn’t find him anywhere. My lungs were ready to burst as it was cold night and my asthmatic symptoms were setting in and I frantically searched for my son.  I asked the front desk staff if they had seen him and they replied they had not. The woman said “do you need a key card” and I replied “no I just need my son back now unharmed!” I made my way to the elevator to see if he was waiting for me while my husband and youngest son went ahead to our room.

For fifteen heart stopping minutes I had no idea where my oldest son was. Was he hurt, was he kidnapped, was he lost and searching for me? By the grace of God he was found when another friends parent saw him waiting in the hallway and took him back to our room. I quickly jumped in an elevator and as my mind raised all I could think of was the last time I saw him. The hurtful words that were exchanged, the look of anger on his face, and how lost I felt when I couldn’t find him. I should’ve took back those spiteful words of anger said, I should’ve recognized he was frustrated and needing to be heard than reacting to his outburst. I needed to make better use of my time with him letting him know even though I disagreed I still loved and respected him.

When I got to my floor I burst out of the elevator like I was on fire and ran to my room. I opened the door and grabbed my son up in my arms in a hug that needed to last a lifetime. He squirmed away from me then eventually relaxed into my embrace as the tears flowed. I tried to talk but my words were halted by my sobs.

What I managed to convey to him was that I was so worried that something could’ve happened to him. With the last words we had spoken to each other in emotion were not what we meant to say. Yet it’s true as the adage says we always hurt the ones we love. Why is that easier option then to just agree to disagree and come up with a solution? There were apologies given and received and for the rest of the weekend he wasn’t out of my sight. Except to play hockey and use the dressing room facilities. Forgiveness was difficult but necessary to give in order to value each other and our relationship.

I never want to go through that heart wrenching experience again! I feel like it aged me by ten years and took time off my lifespan. It all begins and ends with time.  I’ve learned a valuable lesson to curb my temper and refrain from spouting words of anger and angst in the heat of the moment. My son has learned that a moment of negativity can cause him to make a poor choice yet he’s willing to admit his mistake and learn from it. Time it’s the deciding factor of all our words, actions, and transgressions. And I for one will be using my time more wisely with my friends and loved ones. You just never know when that time will run out and regret will take its place. 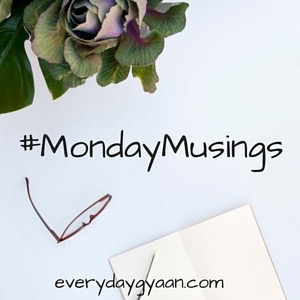 Would you like to take part in #MondayMusings? Our host is Everyday Gyann read her post to see how to slow down and get creative.
Here’s how it works:
Write a post sharing your thoughts with us – happy, sad, philosophical, ‘silly’ even. Make it as personal as possible.

Use the hashtag #MondayMusings.

Use our #MondayMusings badge to encourage other bloggers join in too.