Last week I was late for a very important date with the TTOT linkup date. I missed it by two minutes while my phone flashed a message across my screen storage almost full! I deleted some apps and pictures and was still able to publish. I still posted my story as I know this group of gratitude seekers and appreciaters is game changing for me.

I’m thankful for a week that was busy with back to school after my kids were sidelined with strep throat sickness. There wasn’t a lot of sleep as the germs took down my son’s one week after another. To have them both back at school and able to sanitize every square inch of my home was a blessing.

I’m thankful for an exciting new hockey league that my oldest nicknamed the “Captain” starting playing in. It’s exciting, fast paced hockey which cheers this Canadian hockey lovers heart. Each team mate plays one minute intervals on the ice with three on three with two goalies in total. I never saw this type of hockey so it’s been fun to see how happy my Captain is on and off the ice.

I’m thankful that the medication for my youngest son nicknamed “Mad dog” is working on controlling his asthma and allowing him to sleep through the night. It’s been a long two year journey to get to this point so I’m beyond grateful to not have us both sleep deprived. We are awaiting surgery for him to get his tonsils and adenoids out but for now I’m glad the inhalers are making a huge difference in his sleep deficit.

I’m thankful that we had an early pick me up of a family movie night watching Star Wars The Force Awakens. I saw the movie in the theatre with my Captain when it first premiered. I appreciated  watching it on my own smart tv without being deafened by the sound affects.

I’m thankful that I was able to attend a parenting support group meeting about anxiety. I learned a lot with the content and made a new friend in the process. This month I’ve made two new friends who also have children with autism. I feel I have so much to learn but at the same time appreciating the gift my son is to our family.

I’m thankful that my sweet little boy did so well working with his behavioural aids this week. He was able to complete two sticker puzzles as well as using pastels to colour with and reveal a hidden animal. He found the elephant and was so happy to show his Daddy. He said bring him back a real picture of an elephant when Mommy and Daddy go to Africa.

I’m so thankful that I was able to secure day and night childcare with my family to look after my son’s while we’re away. I’ve never left them for more than a weekend so this will be a huge adjustment for us all. I’m confident that they will have a wonderful time visiting family and going on adventures with their aunties and Bubba which means Grandma in Ukrainian).

I’m thankful that our passports arrived and we’re one step closer to South Africa. I have this beautiful book that I’ve been reading and browsing through to prepare for all the sight seeing we will be doing. Wine tours, a private safari, and spending time at game reserve are just a few things on our itinerary.

I’m thankful for my daily beautiful walks in the sunshine I have the best conversations with my kids when we’re out in nature. Things that seem to bother them just disappear when skipping rocks or running and rolling in the grass. Having my sister’s dog here last weekend was such a special treat for us all.

I’m thankful for my little “Mad dog’s” bravery when he attended his brother’s school’s talent show. We borrowed a pair of noise cancelling headphones and he wore them for thirty minutes. Then he put on his toque to block the sound for another fifteen minutes. By the time the performance was almost over he put the headphones back on over the toque and asked to leave. I’m so proud of him taking on a huge task being in a crowded gymnasium with a concert going on. I look forward to more adventures with my family. I’ll be purchasing his own pair of headphones this coming week. 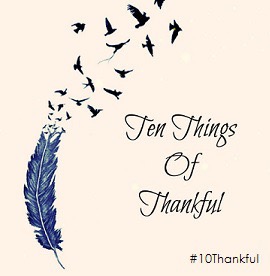