Life can be an uphill battle where you climb the highest mountain and struggle not to fall off. It also has a funny way of working out, and sometimes you get more than you bargained for. I gave birth to my son a month premature after a very stressful period of grieving for the loss of my Mom. My baby and my other son became my whole purpose of surviving that dark, depressing time. His brother was only four when I had to tell him yet another person he loved had died.
Having a premature baby means so many mindblowing things. First, you have to wrap your brain around the fact that your child is really here! Next, you need to devote every waking minute of getting them healthy enough to take home. I had a son at home to raise and a newborn and he belonged to the hospital until he was a healthy weight. I remember that time like it was yesterday how joyous and stressful it was. The sleep deprived days and nights that followed, as well as all the trips back and forth to the hospital when I was released but my baby wasn’t.

My baby was heavily jaundiced and very sleepy so it was difficult to keep him awake long enough to give him a full feeding. I remember having to test weigh, feed, burp, change his diaper, feed him , then test weigh him again. It was a routine that we followed for nearly two weeks and all I wanted was for my baby to be healthy enough to take home. He never did receive phototherapy even though I saw babies before him able to. It drove me mad with anger as the whites of his eyes were yellow that he was so jaundiced.

Back then all the signs pointed to the fact that something was amiss. He would cry if he wasn’t held snugly skin to skin with me. He loved a tight swaddle but his hands and his feet had to be free. He was undoing his blankets and the nurses kept on saying I wasn’t wrapping him tight enough. I replied “this isn’t my first rodeo so I know how it works.” Little did we know my baby was rolling in his glass bassinet and unravelling the swaddle!

He was only four days old and he still hadn’t opened his eyes. I watched him closely as he didn’t resemble a helpless newborn as his strength was astonishing! He would thrash about in his tiny little home and he seemed happy with the thud it would produce in sound. When he was sleeping he would sleep so soundly I would check to see if he was breathing.

I would venture to his crib side and just sit there in the rocking chair watching him and marvelling at his beauty. He would wake up roll towards me and put his hand on the glass. He didn’t like the bright lights or loud noises that would generate with a room full of babies and people. He thrived on being held snugly and loved to be burped as he would release the biggest and loudest full grown man gas bubbles!

I was in awe and scared for my son as he would get his jaundice test daily and one time the nurse had me hold his leg while she lanced his foot! This was the worst experience as he would thrash about and I would beg her to put him under the photo lights in the incubator. He was strong I was afraid he would hurt himself, yet my pleas fell on deaf ears. Everything pointed to the fact that he was a sensory overloaded child. He would be so quiet then wail for hours. It was almost as if he loved to hear his shrill cry.

The day came where I could finally take him home and he had to pass a few tests before leaving. I remember feeling anxious, excited, and scared of the prospect of taking my tiny baby home. When the maternity health nurse arrived the next day she gave him a thorough exam. She had asked me if I had any concerns or comments because it had been four years since I had a baby at home. I replied:

“I only had one and then I said watch” while I placed my baby on the floor with a blanket.

We then proceeded to see my newborn 11 day old baby roll back and forth from right to left! She was in awe as much as I was and I asked her was this “normal”behaviour for a tiny baby. Her response was:

“we always advise parents to keep their baby’s belted and secure on the change table. Even placing one hand on them just in case. Your baby is not the norm he’s the just in case I spoke of.”

Life with my son’s added up to long days and longer nights and plenty of love. My baby wanted to held 24/7 and I spent a lot of time sleeping in a rocking chair. He also was pacifier dependent and would eat every 45 minutes in a given day. If he was cluster feeding it was less and I was shedding my baby weight quickly. He loved the deep pressure football nursing hold while he was snug to my body. Soft fuzzy blankets rubbed on his skin made him coo, and the feeling of a tremendous “man burp”, and being shushed beside his cheek would lull him to sleep.

When it came to time to introduce solid foods to him he put up such a fuss. Everything had to be mixed with carrots or sweet potatoes. I made all my baby food and he would turn his nose up about the stews, squash, and peas. When he got older and ventured into cubed finger foods he would refuse certain vegetables and fruits. He ate a lot bananas and carrots as they are the only foods he wouldn’t cry over. By the time he was 18 months he was eating five foods and saying two words strung together. By two he had a very limited vocabulary and a small assortment of foods he would eat.

I made the call of getting him assessed for his developmental milestones. I read and researched a lot and came across some information on sensory disorders. I made the referral to a child development agency and found a developmental Pediatrician. That led to the discovery that my son fit the profile of having Sensory Processing Disorder. In particular Sensory Modulation Disorder and was seeking out sensory input to gather the messages in his daily environment from his central nervous system to relay it to his brain.

I had heard of SPD as my close friends daughter was diagnosed with it as well as autism. Now it was affecting our lives as my son was rapidly giving me grey hair with his seeking behaviours. By climbing five shelf bookshelves and jumping onto the couch, then jumping off stairs falling, cutting his head open and crying because of the blood running into his eyes! I took on the role of Mom PHD while I researched ways I could help and to stop him from hurting himself.

His pain threshold wasn’t something I could understand at all. As his older brother could have an injury like a stubbed toe, and you could hear him for miles with his reaction. My youngest son is now a preschooler with a diagnosis of Sensory Processing Disorder and Global Developmental Delay. He now has a therapy team in place with an OT (Occupational Therapist) PT (Physical Therapist) and Speech and Language Pathologist (SLP). I discovered in all the research that I’ve done that early intervention is the key to coping and strengthening neuropathways to form new information and skills in the brain.

He also has an Educational Aid that works with him at preschool. In the course of a two months he’s had a ploy sonogram, genetic testing, EEG, and next week an MRI. He was found to have severe Obstructive Sleep Apnea, and I’m currently awaiting the results of his EEG. He has endured it all like the fighter he is from birth. He’s taught me more about what matters in life and they are  family, love, and acceptance. And what doesn’t matter judgement, deadlines, or a neat as pin home. I know whatever trial we have next to face we’ll solider on through it, and the climb has been worth every moment to helping him live a better more balanced life.

Welcome to the Sensory Blog Hop — a monthly gathering of posts from sensory bloggers hosted by  The Sensory Spectrum and The Jenny Evolution. Click on the links below to read stories from other bloggers about what it’s like to have Sensory Processing Disorder and to raise a sensory kiddo! Want to join in on next month’s Sensory Blog Hop? Click here! 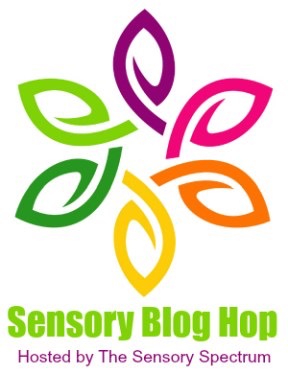