Well here am I again writing about my week in review. As I look back now, I wonder how I survived with my sanity intact and didn’t run down the street stark raving mad. ?

Feat
Well my kids and I got through the first week of school. I’ve been tired and behind on housework. So starting school early in the morning after an early summer break has been exhausting. I’m not complaining though in the province of BC the teachers strike is still on going, and a lot of my friends are starting to homeschool. I was able to meet some new friends at the play group I took my youngest son to. That felt so much better than drowning in my mountain of laundry. What was most shocking was the early snowfall in Alberta. I woke up Monday morning with 2 cm of snow. Now I know that I live in a different climate in a new province, but even the locals were surprised to see the white stuff. ⛄️This 3 day #abstorm became to be known as #snowtember and I cuddled in my blanket fort and drank hot chocolate until the sun came out and melted all the snow. ? ❄️

Fail
On Friday my oldest son came home from school and told me he had the worst day. I inquired as to why and he told me he was bullied. This kid was bored and just decided to start hitting my son with his own hand!!! My son didn’t even have a chance to defend himself. As it had happened so fast and he was in shock. Well since he was bullied before in his previous school, I was very upset. I failed miserably about handing this well. It brought so many of my own feelings of being vulnerable and the victim of bullying. I had to pray on it, and blog about it. I went through the proper channels and spoke to the teacher and vice principal to get the matter resolved. When all I really wanted to do was beat down someone’s door and get answers. But of course I realized this wouldn’t be the appropriate reaction. Hell hath no fury like this Momma bear protecting her child. ❤️

Feat
So I accomplished not beating or berating anyone for this bullying incident. And found it much more powerful to write about it and get those deep, ingrained, feelings out. I’m very honest with my children and I’ve shared stories age appropriately, of how I was bullied. I’ve done some research and found out a lot of great info on www.StopABully.ca. And I read a newspaper article from contributor Dave S. Clark, about the Canadian anti-bully awareness organization Promoting Relationships and Eliminating Violence Network. He wrote that the (PREVNet) is currently working on a study that looks at the brain function of youth who have been bullied. It has found that when a youth is bullied, it activates the same part of the brain that’s activates when there’s physical pain in the body. “Their brains are recognizing the pain of bullying with the pain of physical injury.” According to the founder of (PREVNet) Wendy Craig a psychology professor from Queens university. She also states that for youth who step in and support the victim or stand up to the bully, it was discovered the bullying has the same effect on their brain as it did to the victim. So reading this information has blown my mind and now I know why I can’t “get over it.” The bullying I suffered changed who I was…. So as I process this information, I’ve been encouraging my son to write in his feelings journal. And providing lots of encouragement, positive feedback, and plenty of love.?

Fail
As I’ve been dealing with my sons turmoil of emotions my heart’s been breaking for him. I haven’t told him or let him see me cry. This is all about him, and I will protect him with all the fibre of my being! I love my children with a fierce love, and NO ONE will break them or my bond with them. I’ve hardly slept and I’ve been praying and researching to help work out all this negativity. I’m not the patient Mommy and I owe an apology to my husband, for snapping at him when he just wanted me to come to bed. So not taking care of emotional self as much as my physical self, has resulted in a sleep deprived “Mombie.”

Feat
Here it is a week later, and I went to bed earlier last night out of sheer exhaustion. And for a proverbial night owl like myself that’s a huge accomplishment! I’m being gentle on myself as I’ve been struggling with my little ones sensory issues, and my oldest sons anxiety. It makes my own emotions go into a whirlwind of fear, anxiety, and dread. So I’m meditating, praying, and putting my feelings first. And as a result my sons and I are laughing a little more, and crying a little less. Thats the greatest gift we can give to ourselves. And there’s a powerful force of love in that. So it’s been a messy, tear stained, emotionally charged week, and I’m glad it’s over. Bring on the weekend and the wine and let’s call it day. ?

Today’s Fridays Feats & Fails brought to you by the beautiful soul www.morethancheeseandbeer.com. Please check out her awesomeness and all the other fab bloggers who link up. Smooches. ? 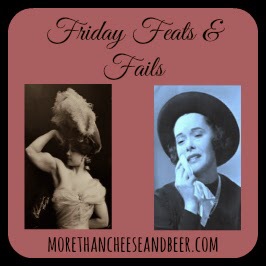